RESEARCH – Explorations in Harmony and Form 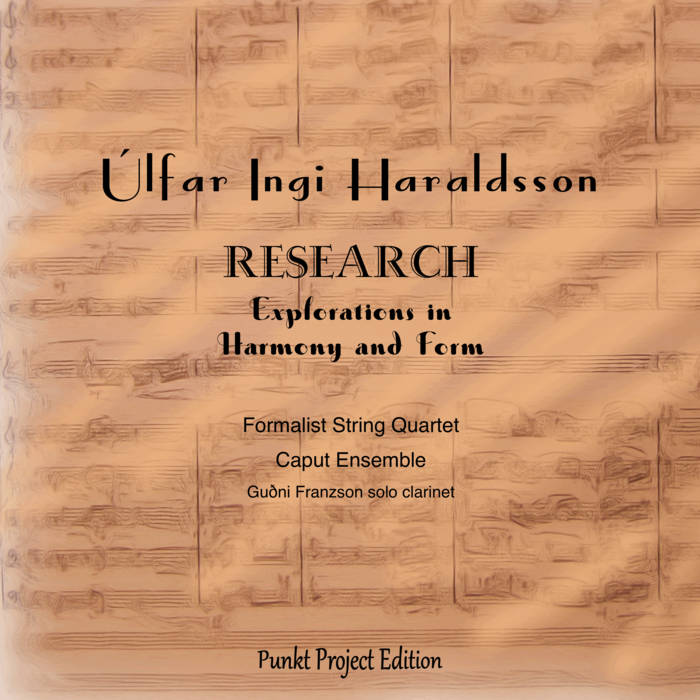 Portrait CD, containing five multimovement compositions (18 tracks) by Icelandic composer Ulfar Ingi Haraldsson. The works were composed 1993-2000 with some revisions made to three of the pieces 2001-2010. The compositions give a good insight into the composer's modernist style with the pieces linked through a common approach and search for a method to work with a revived concept of harmony and a harmonically multi-layered texture in contemporary modern music. Accompanying booklet, 16 pages, with samples from scores and work sketches.

The Formalist Quartet is an ensemble dedicated to the performance of adventurous repertoire focusing on contemporary pieces and world
premieres as well as exploring a diverse spectrum of early music and the standard repertoire. The quartet was born on the 100th birthday of Dmitri Shostakovich (September 25th, 2006) and since then has been playing frequently across the United States in concert halls, festivals, art galleries, cafes, and homes.

The new music ensemble CAPUT was founded in 1987 by young Icelandic musicians. It started as a small chamber group but grew rapidly to a sinfonietta with up to 18 players. The size of CAPUT has always been flexible. Each member can stand out as a soloist and the ensemble plays duos, trios, quartets, octets etc. CAPUT has established itself as a force in Icelandic cultural life and as one of the leading new music ensembles in the Nordic countries. The group is widely acclaimed for its powerful interpretation and technical proficiency. www.caput.is

Many, many thanks to all the wonderful musicians and sound technicians that contributed their artistry to the music on this cd and very special thanks also to my loving wonderful wife, Sigríður Mjöll Björnsdóttir, for her support and patience during the period it took to edit, master, design and release it. I know it took too long but better late then never. Perhaps things are…"not worth saying unless it takes a very long time to say them."

Úlfar Ingi has worked as a composer, contrabassist, teacher and conductor in Iceland and in California, USA. He has written works for orchestra, chamber groups, and soloists which have been widely performed and are available from PunktProjectEdition, the Icelandic Music Information Center and Cantando Musikkforlag. ... more

Bandcamp Daily  your guide to the world of Bandcamp